"...the art of the painter.....that richest vein of creative vision in which essence is distilled from subject and married to idea. It is a visionary genius peculiar to the English masters. The French call it symbolism. The English see it as a strain of native eccentricity." (p.12 Levy, The Paintings of L.S. Lowry, 1975)

It is the measure of great, architectural composition - composition in the classic mould - that the eye always finds a point of ultimate reference: a core of stillness, or of simulation, which exists at the heart of the construction, and beyond all the impedimentia of incidental detail. (p.12 Levy, The Paintings of L.S. Lowry, 1975)

"Albert Camus has written: 'I know from my own experience, that a man's life-work is nothing but a long journey to find again, by all the detours of art, the two or three powerful images upon which his whole being is opened for the first time.'"(p.12 Levy, The Paintings of L.S. Lowry, 1975)

My mum and I went to an "Open Doors" at Galeria Nomada and had fun doing this.... 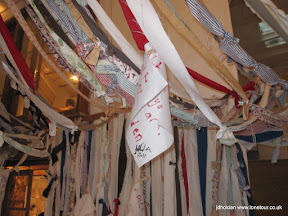 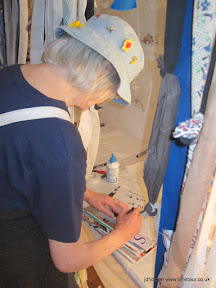 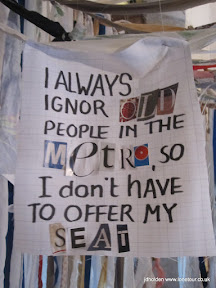 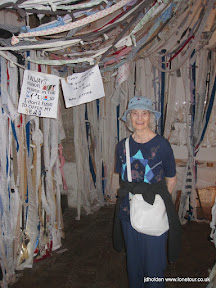 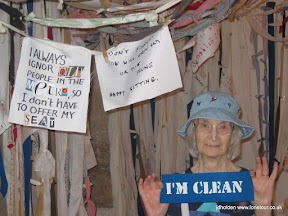 What we didn't realise was that we were supposed to be "rethinking our misdeeds"... someone had already made the "Ignor Old people" sign, which my mum decided to counter... I just put up one of my art slogans...

So, yes, labels are important!! without the "Label" or instructions, we didn't know what we were supposed to be doing. Not that I'd have bothered if I'd known it was meant to be therapy, not art!

How did constructivists paint???

I think I may need to borrow some processes here....

p. 180 "Ironically, TEMPLATE as a structure collapsed under heavy weather conditions some days after its inauguration. Perhaps it was a fitting end, symbolising the fragility of the proposed template and the fate of a form that, made of fragments, is little more than a void. This is the "condition of time", a condition of temporality that governs everything and therefore offers no guarantee as to what will come after. One can only create the conditions of possibility through the actualisations that reveal the material force of its being. These actualisations are what is given at the time but they contain, nonetheless, a potentiality or virtuality which is then to be determined. This the is the freedom of the work itself, and in turn the freedom of its audience." Charles Merewether

One thing has nothing to do with the other...

An occasional series of sculptures looking at ideas, forms and symbols. And a good thing to do while waiting for paint to dry. Or to use up spare paint. 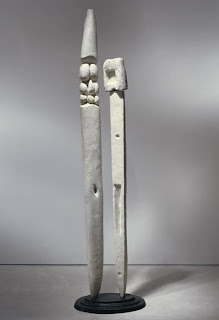 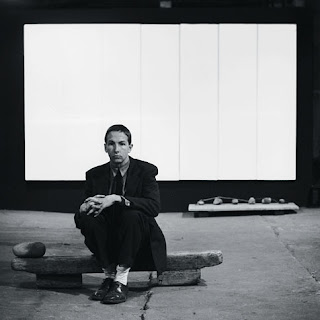 Rauschenberg's moves in white are part of the grand gesture that his early work strove for and often achieved. His colleague John Cage recognised this when he wrote: "The white paintings were airports for the lights, shadows and particles." Rauschenberg was able to make nothing the subject of a painting in a way that Cage would, after him, make nothing the subject of a piece of music. Then everything could enter in. "Having made the empty canvases (a canvas is never empty), Rauschenberg became the giver of gifts." The timing of these acts was crucial; it was a different response to the Second World War and the atom bomb. Unlike the existentialism of Giacometti, which depicted man alone in the universe, Rauschenberg's emptiness has a positive tonality, and although he in part rejected the serious themes of his Abstract Expressionist predecessors, his White Paintings have nothing of the humour of the Surrealists." accessed 6/5/11


p.254 "Aesthetic surprise comes from inspiration and sensibility as well as being abreast of the artistic times."

p.255 "The best of Monet´s lily pad paintings... are not made any less challenging and arduous ...by their nominally sweet colour. Equations like these cannot be thought out in advance, they can only be felt and discovered." 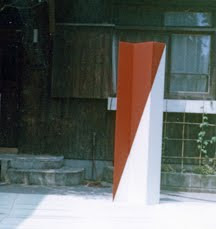 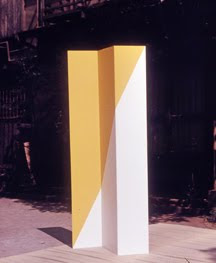 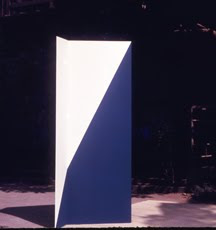 Thoughts on a graffiti sculpture project.

My plan is to put four or five small scale concrete or plaster sculptures on "plinths" a number of locations in Barcelona. They will have to be small enough and light enough to carry on my motorbike from the studio. Each one will have a label with a QR code giving information about the work, the location of the next work and asking for photos of the work to be uploaded. I will document the sculptures on site through video and photos, and possibly interact with the audience. 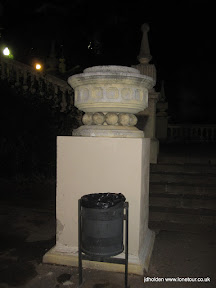 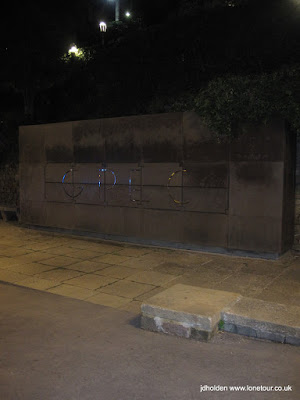 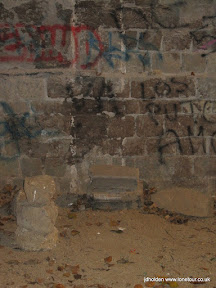 So why am I doing this?
To make some more work public, for free. To clear some space in my studio. To create and document some public art. To talk to people about my art. To try out QR code technology. To make myself feel like an artist. To finally get done an idea I had several months ago.


Update: 4/5/11
So why have I been avoiding this?
Well, partly because it´s a bit scary. But also because I´m not completely comfortable with my concrete sculptures. And I´d like to involve some other people. But now I have a new plan... to work with GAP (Gracia Arts Project) and spend a day together making some AH sculptures, and then the next day to take them out into the streets of the Gotico and leave them around. Depending on the number of people I can get involved, I hope to make 5 or 6 sculptures for this project. And we´ll see how long they last. Hopefully we´ll have a couple of people for each sculpture, or a rotating shift system, so I can have a record of the public looking at them, photographing them etc.