Finally got around to cutting the sheets of metal for Pentecost. 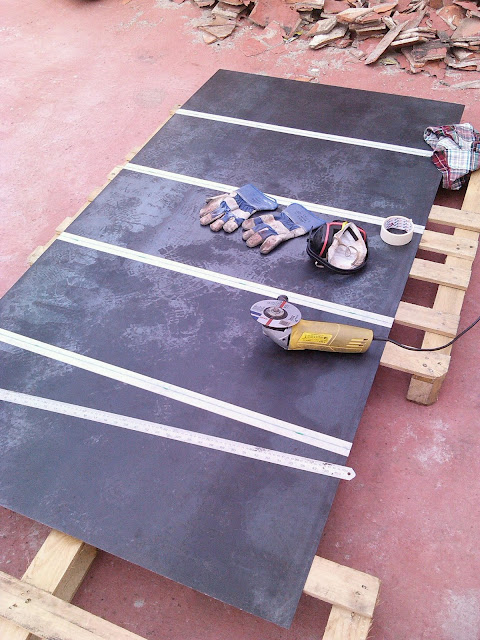 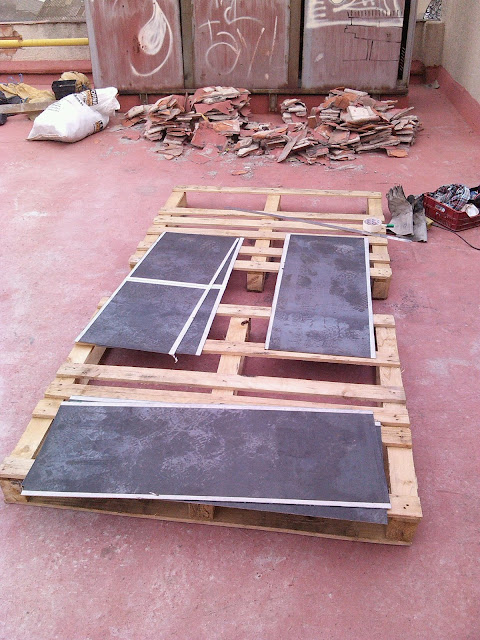 Since the mid-17th century, in literature and in architecture, the folly has been employed as a detour into delirium: nonetheless, a critical medium, oscillating between aesthetic autonomy and social-political potential. As a spatial intervention, the folly can be understood as a rupture, a strategic site questioning the constraints of norms. Gwangju Folly II director Nikolaus Hirsch and curators Philipp Misselwitz and Eui Young Chun have developed a curatorial approach that exploits the ambiguities of a folly as a critical tool of inquiry to address the condition of public space. Since the May 18, 1980 Democratic Uprising, the negotiation of public space in Gwangju has played a crucial role in the political transformation of South Korea—it has even come to signify a model for effective political mobilization. Contextualizing the potential of spatial interventions, the eight newly commissioned follies here seek to test the constitution of public space today—in contemporary Gwangju as well as in the global context.

Architect David Adjaye and writer Taiye Selasi have developed a folly called the Gwangju River Reading Room. It is positioned on the embankment of the Gwangju River, connecting the street level above with the grassy flood planes used as a seasonal park. The structure draws inspiration from traditional Korean pavilions and houses a "human rights" library of 200 books from Chimamanda Ngozi Adichie´s Half of a Yellow Sun to Emile Zola's Germinal.

Inspired by the function, economics, and history of Gwangju's pojangmachas, Ai Weiwei´s Cubic Meter Food Cart reflects on the role these "tented wagons" to instigate a discussion about public space: how does the city reconcile restricting these small, temporary, and useful structures while allowing the construction of massive permanent buildings?

As winners of an open competition for emerging Korean architects, Seok-hong Go and Mihee Kim's Memory Box appropriates an existing system of public lockers. The doors, however, have been replaced with transparent fronts so that citizens are invited to store and display private objects and memorabilia on public view.  Architect Rem Koolhaas and writer Ingo Niermann address public participation in terms of The Vote. Their folly is positioned in the middle of a busy shopping and entertainment district that is mainly frequented by teenagers. The street has been divided into three pedestrian lanes marked "Yes," "No," and "Maybe." Votes are counted via a digital system and tallies are placed online to create a new form of direct plebiscite.

Delhi-based artist collective Raqs Media Collective´s folly have transformed a train of the Gwangju Metro into the Autodidact's Transport. The artists have undertaken a conceptual re-invocation of Erasmus´s In Praise of the Folly (1668) on the Gwangju Metro as a way of extending the Folly project beyond the frame of static presence in built spaces.

An itinerant structure, the Korean artist Do Ho Suh and Suh Architects's In-between Hotel is both strange and familiar. It slips through the fabric of Gwangju's public identity: a temporary dwelling unit activating aspects of Gwangju that have eluded the grand narratives.

Danish artist group Superflex´s Power Toilets address the inclusion of Gwangju into the UNESCO Memory of the World Register. Superflex have replaced a run-down public toilet in Gwangju with a new toilet which—in its interior—is an exact copy of the exclusive toilet used by the Executive Board of the UNESCO headquarters in Paris. While maintaining the semblance of a normal public toilet, the structure also engages its users in questioning the relationship between original and copy, exclusivity and inclusivity, and, ultimately, the infrastructures of power and everyday uses.

The Roundabout Revolution by Eyal Weizman and Samaneh Moafi establishes a relation between Gwangju in 1980 and the turmoil, civil strife, and revolutions that have shaken the Middle East since the "Arab Spring": the parallel uniting many of these uprisings being that they all took place in and around traffic circles. The folly draws a line from roundabout revolution to post-revolutionary round table politics.

Folly: the book The Gwangju Folly II will be accompanied by a conference and a publication. The book takes the form of fragmented glossary of associative thoughts and images, alongside more shrewd scholarly investigations, edited by assistant curator April Lamm, situating the eight new follies within a broader cultural discourse. It includes a photographic survey by Bas Princen and texts by Barry Bergdoll, Joan Didion, Hans Ulrich Obrist, and Felicity D. Scott, among many others (Hatje Cantz, 208 pages, ca. 80 illustrations,17 x 24 cm, ISBN 978-3-7757-3553-7).

"Art should make us feel more clearly and more intelligently. It should give us coherent sensations which otherwise we would not have had."