A Fruitful Incoherence: Dialogues with Artists on Internationalism

Boundary 1. Something that indicates a farthest limit, as of an area; border 2. cricket


Working definition: An ambivalent space from which ideas emerge and practices begin. A position marking the extremities of the given from which one steps off into the beyond.


There is a boundary to men's passions when they act from feelings; but none when they are under the influence of imagination.
Edmund Burke

I think you always have to find where the boundary is in relation to the context in order to be able to kind of articulate how you want the space to interact with the viewer.
Richard Serra

Music is your own experience, your own thoughts, your wisdom. If you don't live it, it won't come out of your horn. They teach you there's a boundary line to music. But, man, there's no boundary line to art.
Charlie Parker

“Self-image sets the boundaries of individual accomplishment”
Maxwell Maltz quotes (US plastic surgeon, motivational author, and creator of the Psycho-Cybernetics, 1927-2003)

“Life is perpetually creative because it contains in itself that surplus which ever overflows the boundaries of the immediate time and space, restlessly pursuing its adventure of expression in the varied forms of self-realization.”
Rabindranath Tagore quotes (Indian Poet, Playwright and Essayist, Won the Nobel Prize for Literature in 1913, 1861-1941)

Making a Memorial - Editions and Production

I have an affinity with Walter Benjamin, for no particular, but several interesting reason. So I am working on a series of works as a "memorial". An Abstract Head, of course, though based on three photos; an AH sculpture, but only with three pieces, the blue forms taken from the triptych. And then a feuilleton, using embossing and printing techniques that I have been developing through Groundworks. 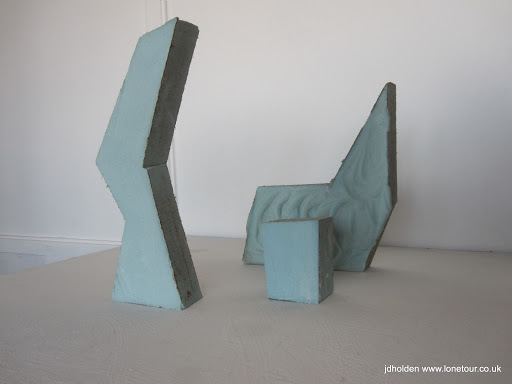 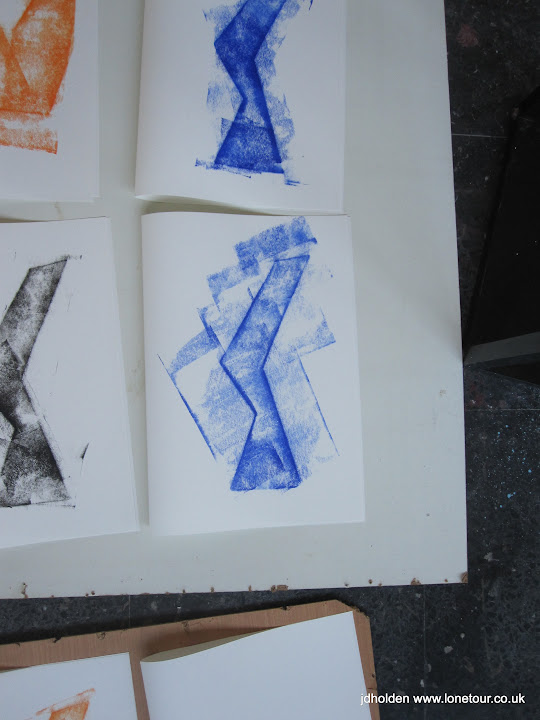 So what is an Abstract Head for? It's a formal piece of enquiry, based on a human head. It's about abstracting from, a rather old-fashioned idea, that quickly went out of fashion as abstract came to mean something quite different. But I rather like the idea that my work comes from the same evolutionary line as Picasso, Braque and Mondrian, though following its own direction now. There are some rules, but they change and evolve over time, rather like a face itself. It's the same face, only different. Some unchangeable rules are:

1. Triptych. The purpose of the triptych is two fold - to give the form of the head space to breath, to adapt within its own space; and to make the spectator move. Not very much, but certainly their eyes have to move, from canvas to canvas. I didn't realise this at the time, but now that I know I have peculiar eyes, I realise this may be because I have difficulty looking at one thing at a time, and prefer to keep my eyes moving all the time.

2. Size and shape. Each canvas is 40x40 cm. The point of the square is that I didn't want to use a rectangle that would be either landscape or portrait. Whilst the human head is not, usually, square, I wanted to ensure that there was no sense of a landscape, nor of a complete human body in the work.

The first series of Abstract Heads was full of colour, the whole canvas being covered with paint. But then I looked at one "unfinished" triptych and realised that it was, in fact, "finished".

This has led to series two, where only some of the forms are used to create the triptych. This, I feel, increases the formal quality of the work, as its basis in a human face is very much less present.

This formality has led me on in my exploration, using devices such as moulding plaster, constructing mobiles, use of wire, curving the flat form into a cylinder, embossing and printing.

My current exploration of Walter Benjamin is guiding me towards the ideas of the flâneur, the feuilleton and fashion; with further forays into Black Swan Theory. And so, I am going to take my sculptures for a walk, create radical and seditious editions of "newspaper" styled artworks, and be thoroughly unfashionable. How much this will work remains to be seen.

I love this phrase. It seems to sum up what sculpture is all about. There may be more thoughts on the subject later.

It was only logical that he could only represent the harmony he had ben seeking for years, by dint of constant practice, in the human face, for only there do inside and outside, man and world, nature and soul meet, where "religion", in the truest sense of the word, takes place.

"And then I found it necessary to find a form for the face, because I had come to understand that great art can only be painted with religious feeling. And that I could only bring to the human face. I understood that the artist must express through his art, in forms and colours, the divine inside him. Therefore a work of art is god made visible, and art is "a longing for god"".

In 1934 the seventy-year-old painter addressed the theme once more. In his series of "Meditations" the human face is reduced to the barest essentials.
The picture plane and the face are identical. Eyes, nose and mouth are little more than a few lines of paint, joined into a cross. This - Russian Orthodox - cruciform stands out against the ground, which is built up with elongated, parallel brushstrokes. The expression is largely determined by the painterly action. Ill-health had forced Jawlensky to devise a new technique...Out of sheer necessity he painted with outstretched arms, clutching the brush with both hands.

At a time when [some American artists] were exploring the artistic possibilities of repetition, Jawlensky´s series came as an absolute revelation.

The young Cage, who was so impressed by the meditations that he bought one, addressed Jawlensky as "mein Lehrer" in a letter.

I saw this book lying on my normal desk at Tapies Foundation Library, and read this apology for his work. Interesting reading for the "Mapping the Territory" task.

Nostalgia; or not everything you see is old.

I was chatting to Kirstie in my studio about framing my AH series. I said that I wanted to use old wood, from drawers etc. so that they would like like the pictures could have come from any part of the 20th century. Hmmm... she said, but these are people, in the present, from an actual time. Ah yes, I said, but these paintings make them immortal, and that immortality can make them be from anytime. 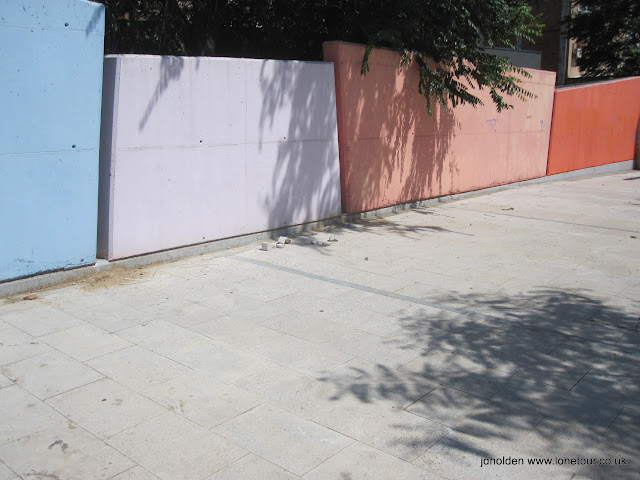 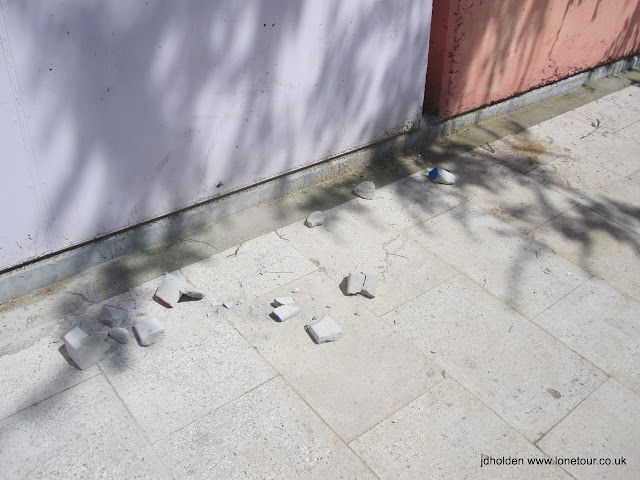 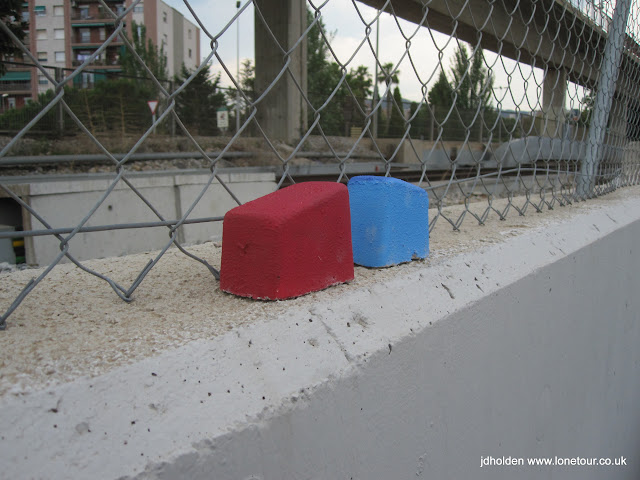 Possibly the most important five minute of my life!

Here's a very bad picture taken from Sketch Up of a mock up of a Mies Pavillion Series Sculpture. 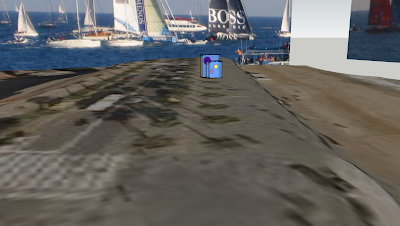 Why? A question of justification.

The other day I was chatting with Miguel (one on the collaborators on my "Prometheus" project) about the use of scaffolding in a dance/performace. He suggested that it should be gold. Later he got some dental floss to talk about the idea of making a "web" in the shape of an Abstract Head, that would connect the audience, or for them to break as they left the theatre.

And then I realised what "justification" means. It means asking "Why?" about everything that we do. I don't want my audience to break things as they leave. Why? Because "Prometheus" is a work of creation. I want to create, to create, to create.

Everything I hate about Contemporary Art.


That's a fairly good list for Breaking the Boundaries.

Here's some brilliant art that ticks all my hates. Well done Marcus Coates.

And you can see an installation view of "Birdsong" here.

My wife's cousin doing his thing! 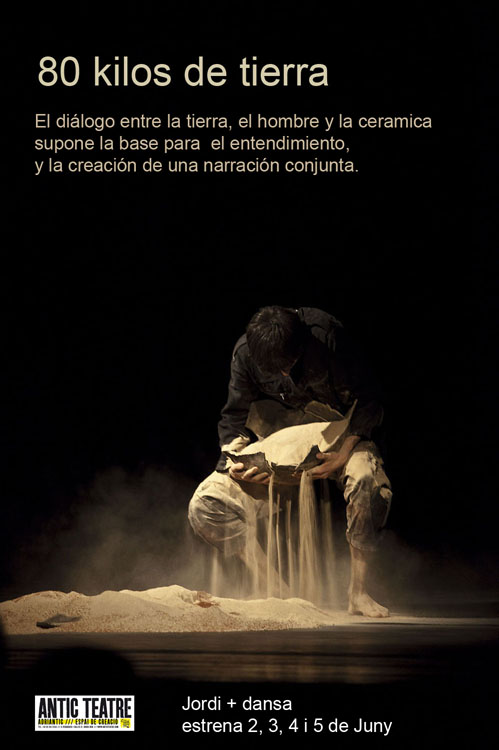 At an exhibition... even when inert forms are involved, there is the possibility of an immediate discussion, in both senses of the term. I see and perceive, I comment, and I evolve in a unique space and time. Art is the place that produces a specific sociability. It remains to be seen what the status of this is in the set of "states of encounter" proposed by the City. How is an art focused on the production of such forms of conviviality capable of relaunching the modern emancipation plan, by complementing it? How does it permit the development of new political and cultural designs?

Art is a state of encounter.

What is the encounter with my art? Well, most of it is un-encountered for. The immediate discussions available at an art exhibition are:

1. the viewer with the work

2. the viewer with another, known, viewer

3. the viewer with another, unknown, viewer

4. the viewer with the gallerist

5. the gallerist with the viewer

6. the viewer with the artist

7. the artist with the viewer

How does art emancipate?

At last I have put a graffiti sculpture out there. It was spotted by one of the people from my studio... so other people must have seen it too. It's gone now (within four days), probably the parks people when they came to do some tidying up.

Success from Lonetour on Vimeo.

Strange things going on with the light in this picture, just getting to grips with photo editing... but enjoy, nonetheless.

Although based on a Tangram, this shows one direction my Abstract Heads work could take.