"All future is the past. The past of things is the future of the "I" time. But past things have futurity." p23

"A philosophy that does not include the possibility of soothsaying from coffee grounds...cannot be a true philosophy." p.40

Kant = pure reason. Hamann = "not only the entire capacity to think rests on langauge, but language is also the centre of the misunderstanding of reason itself."

BUT what about art!! reason without language!! 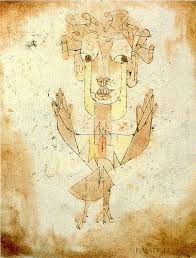 Haptic art = egyptian art and hollow relief this makes me think of Braille
Optic art = Greek are with foreshortening, shadows - but "depth" is still restricted
3D art - late roman art - "the space between bodies appears measurable, and although still organised in relation to a plane, the objects have no tactile connection to it. This is achieved by deep shadowing and the objects tend to blur into their environment."

so my question here is the position of the white cube. if art is in a white cube, it cannot blur into it´s environment. Caro puts his work into a field of green (grass, for example). see also the female artist talking about her little people sculptures in an opulent room, rather than a white cube.

"The collector is the saviour of objects that might otherwise be lost." p.77

"The place where the word is most debased - the newspaper - becomes the very place where a rescue operation is mounted." p.131

"a halo of uniqueness and authenticity" p.135
"The unique phenomenon of distance no matter how close an object may be"
"To substitute a plurality of mechanically reproduced copies for the unique original must destroy the very basis for the reproduction of auratic works of art - that singularity in time and space on which they depend for their claim to authority and authenticity." p.137

do I believe that my works of art have authority? do they have an aura? should i give up now?????

The past witnesses of the present (the arcades of Paris)

"In the ruins of great buildings, the idea of the plan speaks more impressively than in lesser buildings, however well-preserved they are." p.165

Bringing real life back into art is what was needed.